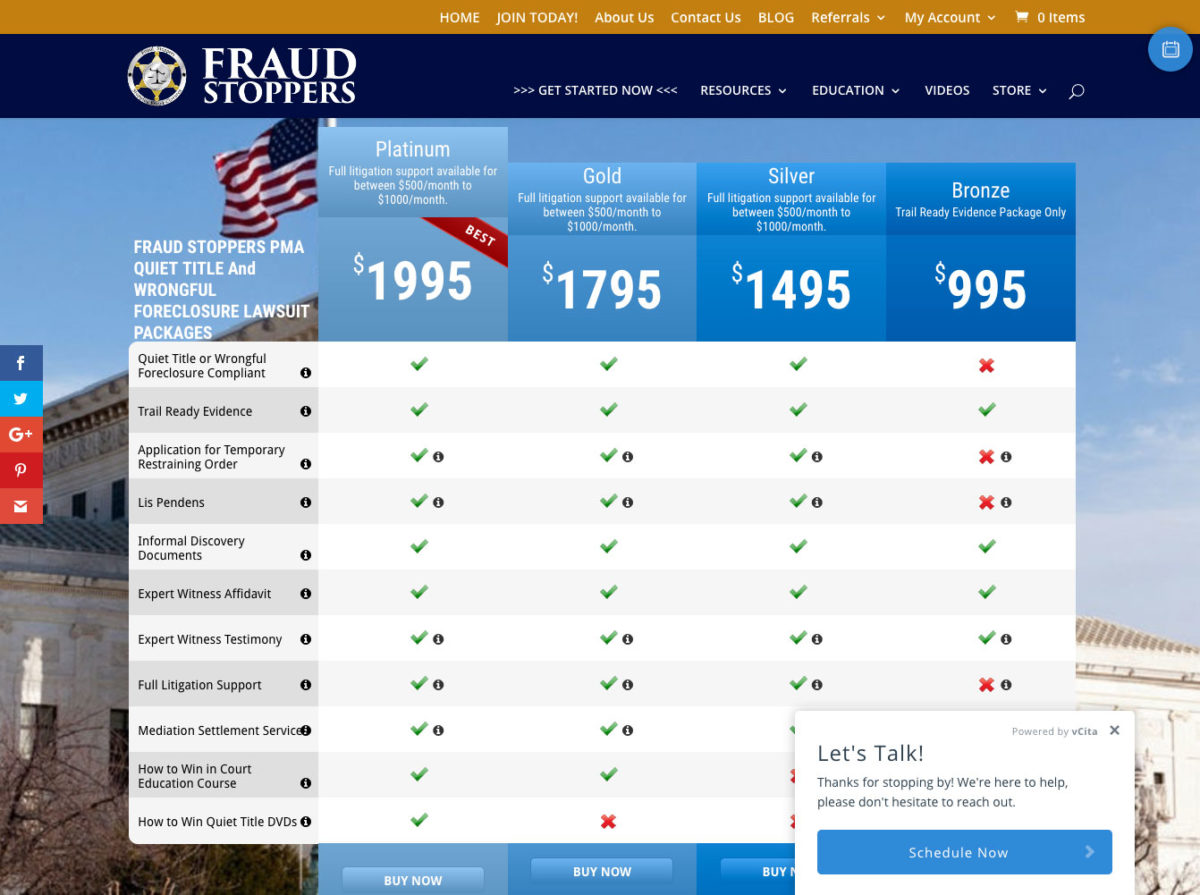 Fraud Stoppers needed a major site that included eCommerce and more. We installed a CRM (Customer Relationship Manager) for their first foray into eCommerce and appointment scheduling. We setup their payment gateway and they were taking orders online the same day. Soon after, we installed a full-fledged eCommerce solution with gorgeous product tables.

They started up with a membership model and we developed their fully featured membership site which keeps track of transactions, subscriptions and more. We consulted with them for video Youtube marketing and introduced them to video production.

Today, leads pour in through YouTube. Further, we helped them integrate their custom ized management system that plugs into their document handling process, and finally developed a two-tier affiliate referral system.

This client has been updating their own site for over a year adding hundreds of pages and blog posts. Some don’t really meet our design strategy and we continually try to steer them back to the high visual standard we started off at, but the site is working and people are buying and leads pour in on a daily basis. 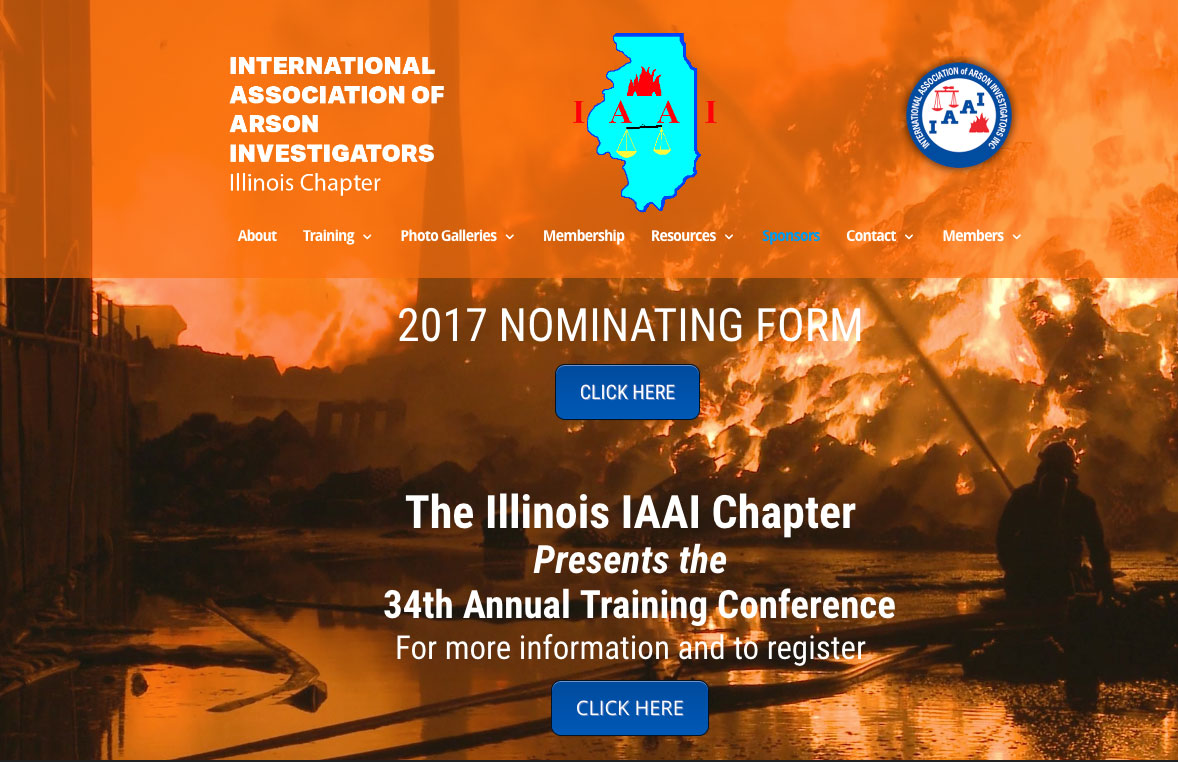 The Illinois Association of Arson Investigators really needed a new site. But more than that, they wanted a membership site and an event ticketing system and newsletter that would integrate with the membership API. They have over 900 members and we needed a robust system all the way around.

They are now setup with scanners at the events and process incoming participants with their PC. It’s important that records are maintained for legal purposes for certification and when testifying on cases in a court of law. We also thought video headers would not only look great but would better showcase the extreme level of situational awareness needed by the organization membership.

Now in their second year, IL-IAAI renewed the annual prepaid maintenance agreement due to the complexity of the site. However we have thoroughly trained the key people in the organization in managing the membership functions, event management, as well as making updates to their site. 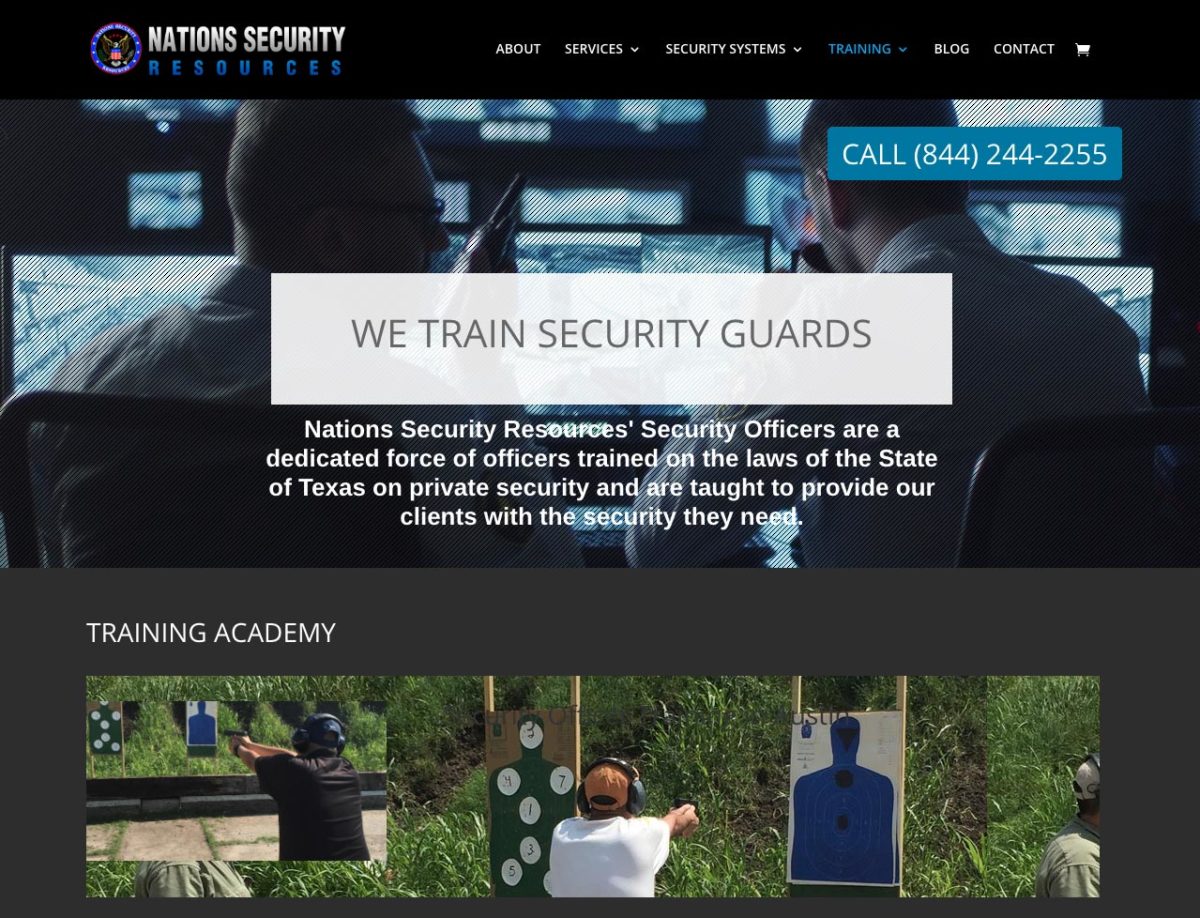 Don’t be surprised when we try to steer your site to an eCommerce site! Sales, sales, sales and more sales make the world go round. We use open source eCommerce solutions and setup your payment gateway as well.

We are having a lot of fun with full width video headers and smooth scrolling functionality for all sites. The scrolling enables us to maximize the UX/UI in your site. Visitors that like using menus can find your articles, but some like to scroll. We set up sites for the best of both worlds.

Who said attorney sites need to be boring? We discovered that attorneys are writers by nature, and also by trade. They write briefs, they’re great in courtroom dramas, but they excel at ordering their thoughts and getting everything on paper. Content is king and attorneys are some of our best clients. The more content we can get online of course the more Google will love us and that’s the name of the game.

Dreger Law’s site has evolved nicely into a content rich site. With the help of a great mind in Rob Dreger, a websites like theirs can gradually gain dominance in the search world through well written content. We trained their office manager in independently updating their own site.

Chicago Media Guys is now expanding our brand as American Media Guys, an enterprise established to open up new U.S. markest and compete in niche international markets as well and we’re grateful for our connections with Dreger Law. 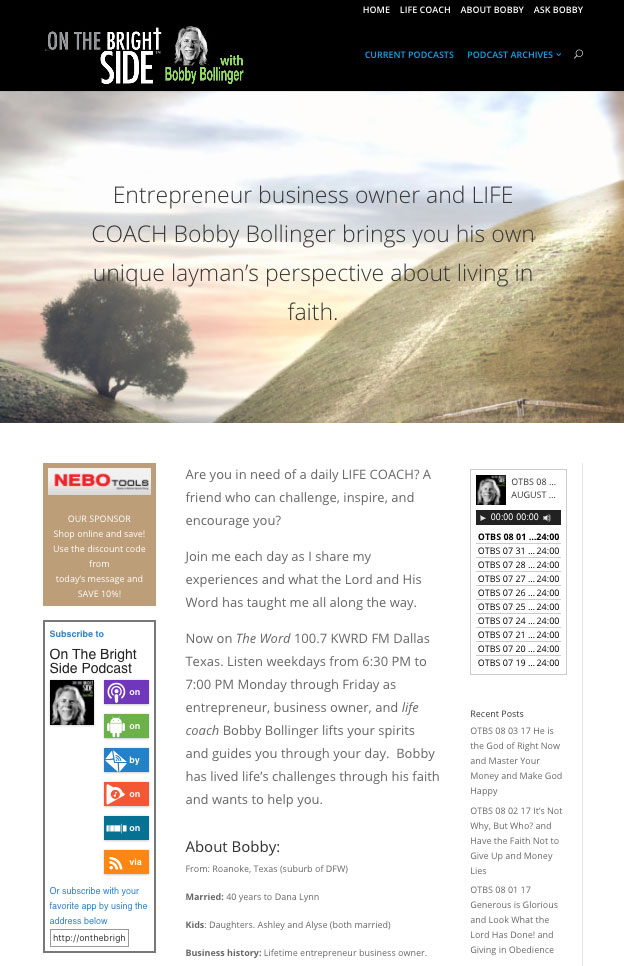 A long time ago in a design world far away we used to create rich-media sites in Flash. We had animations and embedded video and sound and designers were having a blast. Then Apple premeditatedly murdered Flash and the web animators were left high and dry. Along came Content Management Systems like Joomla, Drupal, and, ta da, WordPress. Eventually HTML5 came along on which the CMS’s all standardized and we slowly got back into animations and we could include video, but not really animate. Thankfully at about the same time Adobe Edge Animate came along that created HTML5 code and we were back to timelines and some limited animation, but never as good as Flash ever was. I was doing Ken Burns effects before I ever saw a Ken Burns special, so really, I call them Dave Knoerr effects, but no one noticed except my customers and their customers. Alas. But I digress.

We created Bobby Bollinger’s site in the wake or should I say when Flash was interred forever, so we were forced to embed awkward XML files that we called from modules in the Joomla! CMS. God help you if one semicolon was out of place in the code. Fast forward a few years and with the advent of HTML5 and some great new plugins in WordPress, have now enabled us to do some rudimentary animation, but also to embed some awesome audio players, and cross post to other platforms. So we were doing iTune links, but now we can cross post to a variety of the best podcasting apps.

The new systems are nice and all, but everyone is designing themes that basically are lock-step and focused on standardized UX/UI, (User Experience / User Interaction) to the point of the designers becoming robots in the mindless crush of sameness. So we still dare to flirt with creativity here and there. Hopefully we can have a little fun and create great experiences like on this site for you too. Before we get euthanized by the robots that is! 🙂 But once again I digress. Apologies.

Our integration and design teams focus on building a highly-functional site that you can update yourself. 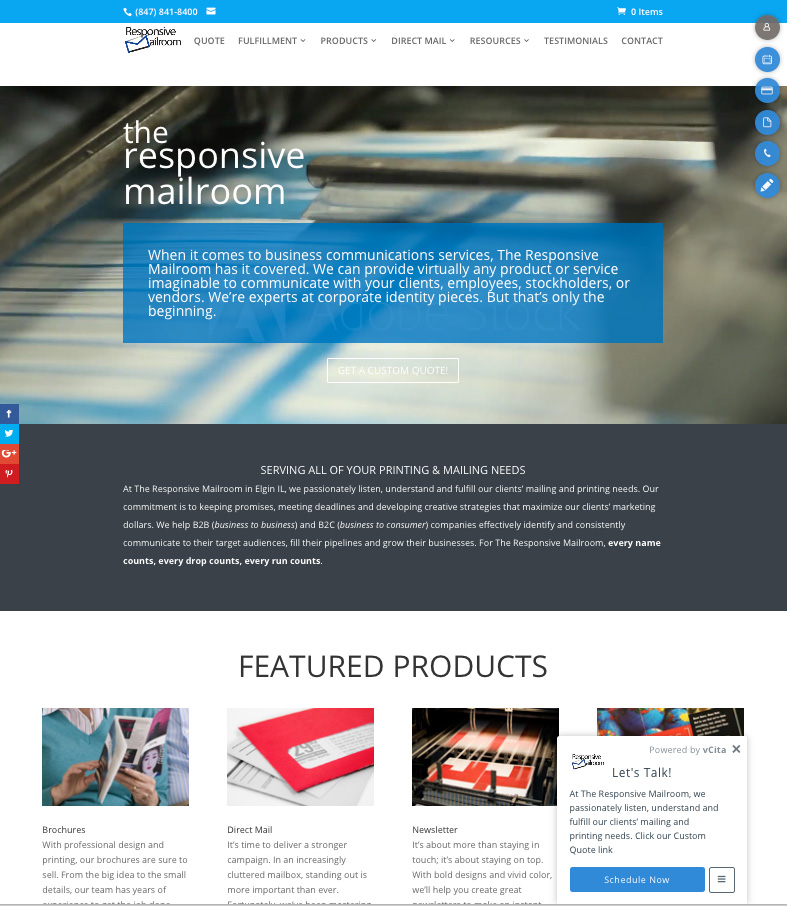 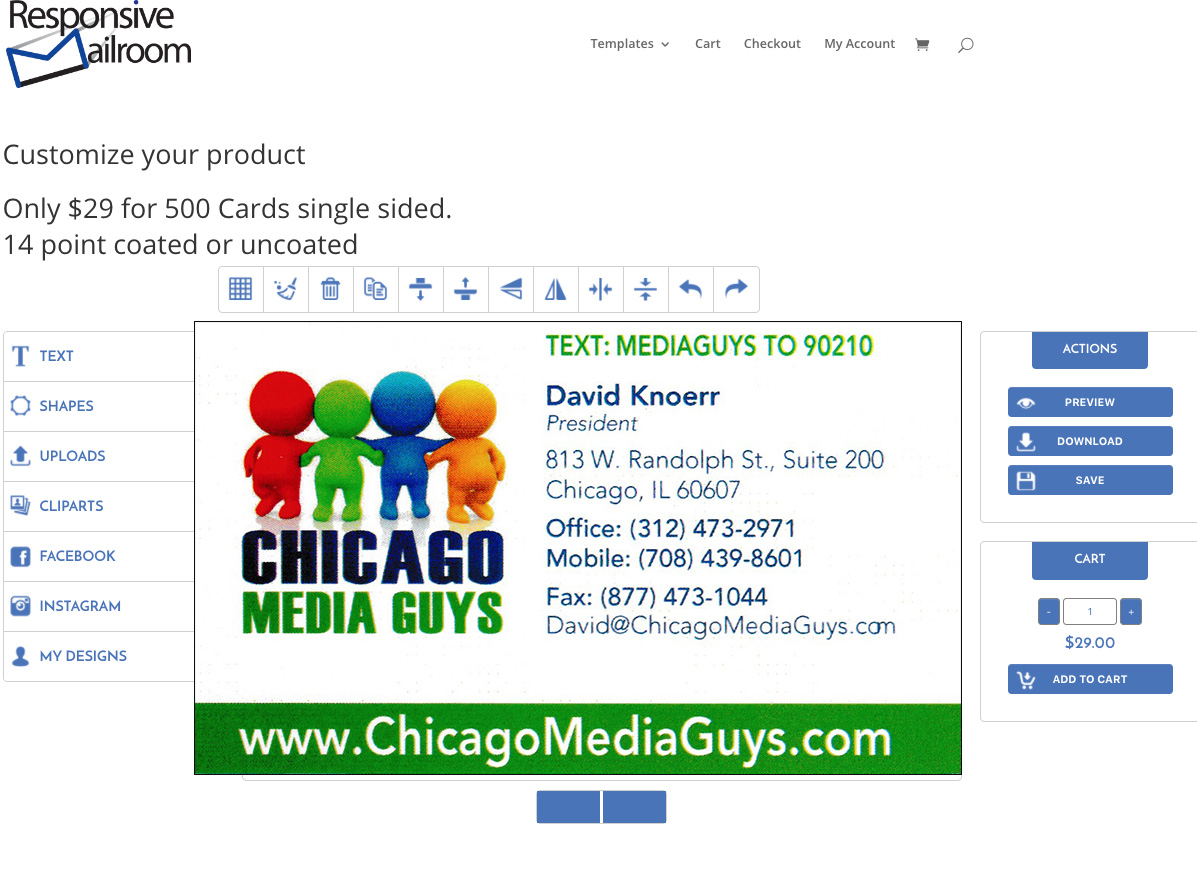 Printers pay big bucks for their product designer “business-in-a-box” or “web services” websites that enable customers to design their own t-shirts, business cards, brochures, and more. In our research and experience we discovered that most start around $7,000 and cost about $1,200 a month to maintain. (That beats the million dollar startups earlier in the printshop-in-a-box systems like VistaPrint but it’s still out of reach for many SMBs.)

I KNEW we could do better and for several years we made it a priority to implement a system just for small print shops that would not break the bank. In August 2017 our first prototype is up and running. Design your own printed pieces, pay online with a seamless ecommerce esperience,, save your designs, log in and copy and update business cards and any other printed pieces.

This client is getting ready to roll out their entire product line and we have several products  up and running at this time. This is a very exciting product for American Media Guys and we hope to offer this to every SMB print shop in the country . . . heck . . . the world!

Our installation allows their web site visitors to create their perfect logo, t-shirts, business cards, prints, mugs and any product which needs to be created online prior to order.

The system is built using WordPress best practices both on the front and the back end. This results in an efficient, robust and intuitive order processing front to back.